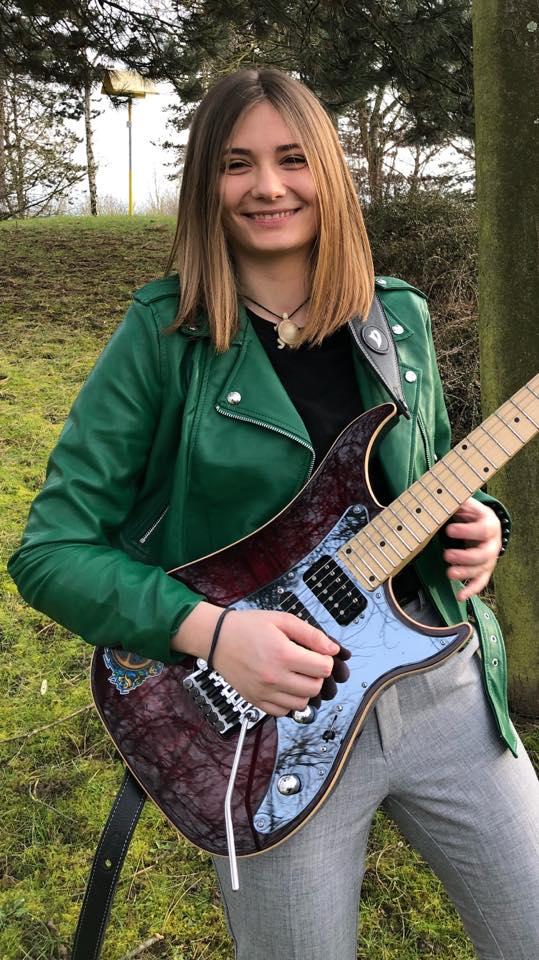 Tina S videos were among the first cover videos that I posted with commentary on this site. As, since that time, the number of her YouTube subscribers has exploded (710,571 as I write this), and as a devoted and enthusiastic fan base has developed, I think it is time to put down a few more thoughts. (Also, as might be expected, her videos are, by far, the most viewed videos on my site.)

Tina is 19 now and was barely 14 when she first came to my notice. In 2013, a friend sent me a link to Tina’s “Eruption” cover with the words something like, “Man, you’ve got to see this!!” It was the first I knew of her, and I was immediately struck by the dynamic clarity of her playing and by her cool, almost fey, appearance; a combination, in fact, *not remotely like that of anyone else*. Who was this beautiful, enigmatic young lady with the cool casual manner and evident quiet depth of disposition? I immediately felt a vital kinship with her. Clearly, from that time to this many people have been struck in the same manner. (There is much more to music appreciation than simple admiration of technical skill no matter how astonishing it is. Resonances abound…always. It would be silly and dishonest to ignore them.)

Tina’s covers are my favorite metal covers, especially among those of young guitarists. To me, they are distinctive and immediately recognizable. Her unique beauty of execution is second to none…period. A few people can’t see my point-of-view, but the covers they point out as “better” don’t have the power, beauty, and depth of Tina’s to my mind and often they are “show-off” covers, usually by young men who think a few “badass” tricks are what makes great music. (A number of young folks have sent me videos of their versions of covers Tina has done with comments like, “See, that’s how it should be done.” It is generally embarrassing because these videos are usually 1) grim and flat or 2) full of common and ephemeral hormonal angst and fantasies of power manifested in tricks thought of by them as badassism.)

Whether or not it is your “thing”, Tina is coming from the “classical” school of playing and musical development where it is important to learn and develop and where attention to detail is important…music as an art and a craft to study, to learn, and to shape and make beautiful and exciting. The rarity of young YouTube metal cover uploaders who come from (or take seriously) this powerful tradition of music may account for occasional blindness to the quality of her covers (which, however, really *are* deeply badass (feminine version) and magic mojo-enriched for those who can hear it! Tina has a rare knack of making people feel alive. Many people feel it and say so. It is not something to scoff at.)

Tina hasn’t posted a YouTube video since August 2016.  She is probably entering into another phase and level of making music (and she was in school part of the time).  Let us hope her career will be in music…It is exciting to contemplate…, but it’s her decision and her life. That there would be a long period of time in which to work toward a new career level in music after the incredible success on Facebook is not surprising to me, though naturally fans are impatient to hear something new from Tina. She keeps up her Facebook and Twitter sites with an occasional picture and comment, and Vigier Guitars continues to list her as a Vigier artist and to share her Facebook and Twitter posts (they, apparently, are enthusiastic about her)…and we shouldn’t forget that Vigier presented her with a new “Rock Art” guitar last year. Yes, I think we will hear more from Tina.